Get to know what our engineering teams have been doing

This previous post worked through the process of automating deployment of a Hugo blog to an Amazon AWS environment. Part of that included setting up a Cloudfront distribution to act as a content distribution network in front of the S3 bucket.

Using Cloudfront as a CDN means that the actual content is replicated out into the CDN’s edge nodes, and will be served from there rather than hitting the “real” backend. The tradeoff is that changes to the “real” content will take time to replicate out to the edge nodes, so it can be a while before they show up. Not ideal if you want to get new or updated content out there quickly.

A workaround for this delay is to create an “invalidation” - basically telling Cloudfront that the cached versions of specific files are now stale, and need to be updated.

There’s a cost for creating invalidations, so they’re not something that you want to do multiple times an hour - but for getting the latest version of a site out there, it’s not too onerous.

You can create invalidations manually - but rather than forgetting and then sit around wondering why nothing has changed, a more robust process is to add them to the deployment stage of your CI workflow.

The overall process is as follows:

To keep the deployment configuration and the parameters (such as access keys, secrets and Cloudfront distribution ID) separate, you’ll use a Gitlab environment variable which will be substituted into the config at runtime.

In the Gitlab project, select the CI/CD option from the Settings area in the left-hand sidebar, and add a new Variable. The Key is up to you - I use PROD_CLOUDFRONT_DIST. The value is the Cloudfront distribution ID from the prerequisites.

Once you’ve got the Cloudfront distribution ID saved as a variable, you can use it in the .gitlab-ci.yml configuration file.

In the prod_deploy stage we’re going to add a third script step, which will create a new Cloudfront invalidation as soon as the built files have been copied to S3.

Add the following below the S3 script:

(Technically, you could scope the wildcard down a bit to save on potential costs (you get 1000 file invalidations free per month, and they cost $0.005 thereafter) - but using the * wildcard means that you won’t accidentally miss less-obvious changes.)

If you now trigger a production deployment by pushing to the master branch, you’ll see an extra step being logged once all the file copies have taken place: 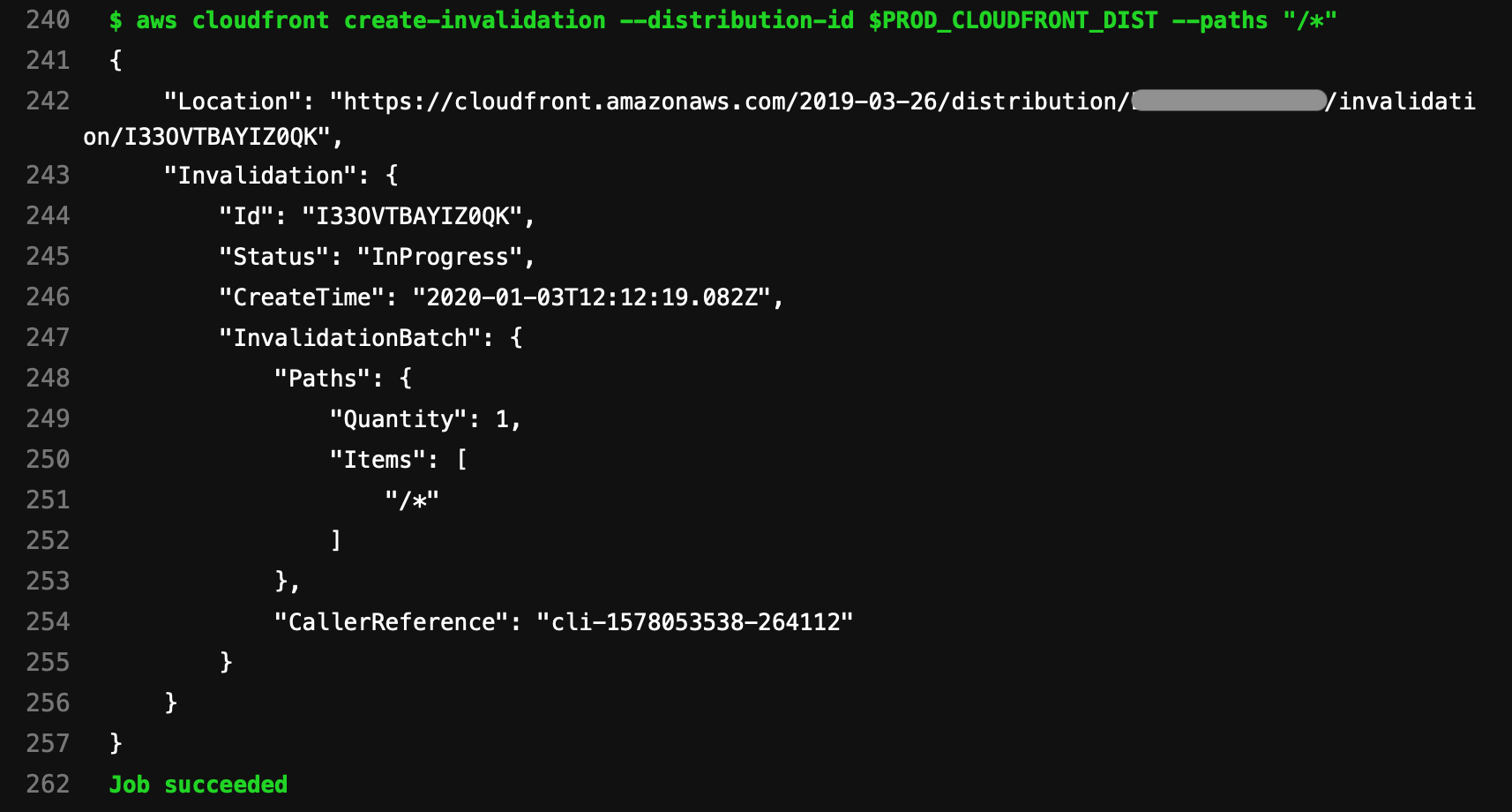 If you reload your live site after a minute or so, you should see your changes immediately viewable.